When I started Ahimsa I knew what I wanted to do, but I had no idea what I was getting myself into. Every once in a while, things start to pile up and I just feel like I’m failing at everything. Figuring out a lot of the little (and big) things, learning by trial and error and realizing how much of myself it was going to take to launch a company was challenging.

There was one particular week that I was exhausted, had hit some roadblocks and had not spent nearly enough time with my kids. It was a week of failure and mom guilt. Then, my six-year-old daughter looked up at me with the prototype of our nesting spoon in her hand and said, “Mom, did you make this? So, does this mean you’re an inventor?!”

I had to stop, pause and think about an answer. Then I opened my mouth and said, “well, I guess it does!” She replied with “Wow - I want to be an inventor too.” Cue waterfall tears. That very night, I started writing my first draft of a patent.

I realized that while I was having mom guilt about not being able to do our routine trips to The Children’s Museum, my kids were watching me and learning STEM in a different and exciting way. As a mom, we often feel like we have to juggle it all. Being productive at work, cooking healthy dinners, scheduling HVAC maintenance, signing up for soccer leagues, starting a company … and somehow spending time and effort equally on each task. Even though I continually come up short for the expectations I set for myself, I have been working to focus more on the strong example I am setting for my kids. Particularly my two little girls. My girls as "princess super heroes!"

Just this week I was listening to an NPR reporter discuss how culturally ingrained it is for boys to be encouraged to “help out” girls beginning at a very young age. It reminded me of a study that came out just a few months ago that showed boys and girls begin with similar math abilities. So why do men seem to excel in STEM education and careers? One of the study’s authors suggested “the answer involves the societal messages girls and young women get, and the difficulty of entering a field that includes very few women. You can look at ratios of women and men participating in different activities and you can get the hint.”

My father pursued a career in science and encouraged us to pursue our own passions. My mom, like many Asian mothers, placed an emphasis on education. She would serve us homemade South Indian food (on stainless steel of course!) and with a stern smile and raised eyebrow say “ok - eat then study.”  She said that boys AND girls can do anything they put their minds to .. again, Mother knows best.

I remember walking through the halls of our medical school and noticing the class photos framed on the walls starting in 1903 were all male. They continued to be all male for years and then finally, you would see one or two females in that composite. Now, for the first time in history, women make up the majority of U.S. medical students! Wow.

So, I’ve now unintentionally entered the world of women inventors with the Ahimsa patent pending nesting spoon. The idea was born out of wanting convenience as I was feeding my nephew. I had been out of the baby phase for quite a while and was caring for him while my sister was on an emergency medicine fellowship interview. I had completely forgotten how messy feeding a baby was! I wanted to set the spoon down, so I could wipe his mouth, but then the mess would get on the high chair or the spoon would tip over the bowl. I thought, hmmm, there must be a spoon that would just rest neatly inside a bowl. After consulting the Internet I couldn't find great options. I worked through many prototypes to fine-tune it for tiny little mouths. And to stay true to our message, I wanted it to have a lifetime’s worth of use. That’s why I wanted the handle to be a bit longer so it could double as a great coffee or tea stirrer! It not only hooks nicely on an Ahimsa bowl or yogurt cup, but fantastically on a mug as well.

When I designed it, it just made sense. I didn’t realize at the time I was actually inventing something. Even typing this it seems a little crazy. I’m an inventor it seems, as my daughter so practically pointed out.

As much as I’d like to say women are being heralded for many inventions, I was shocked to find out how few women-credited inventions there are. Last year the United States Patent Office published new data that showed “the number of patents with at least one woman inventor increased from about 7% in the 1980s to 21% by 2016. Despite this increase, the percentage of all patent inventors that are women, or the annual “women inventor rate,” reached only 12% in 2016.”

I am so grateful for the many women inventors who came before me and hope to encourage all of you who have that next great idea! Sara Blakely is one of my many inspirations. She invented something many women wanted (SPANX®) while facing challenges in a male-dominated manufacturing world. She wrote her own patent because she couldn’t afford a patent attorney and now ...  She is a billionaire cheerleader to WOMEN entrepreneurs and inventors - her attitude, ingenuity and perseverance is an inspiration to so many.

Necessity is the mother of invention. So the way I see it - mothers are natural inventors. We often see the world through needs - of our partners, children, professions, homes and ourselves. We often are devising solutions to issues we see in our daily lives. So, you’ve probably already invented something! And as I’m finding, there is an expansive community of women that is ready to help you in any way possible. The #womensupportingwomen movement is real. (By the way, I just learned what a hashtag is a few months ago).

So go on ladies… do your thing. You’ve got this.

Let customers speak for us

As a Dad, I’m typically on dish duty. I have to say washing these dishes is kinda fun. They wipe off so easily and they don’t stain so it makes my job a breeze. The colors are just so cool that I actually wish it took a bit longer to clean! Plus they dry quickly too - looks like new every single time and ready for the next meal. You knocked it out of the park Ahimsa. 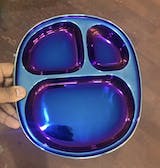 I’ve wanted to switch to stainless steel for sometime especially after the AAP warned parents to do away with plastic in the kitchen for kids’ health. We also are trying to live a greener lifestyle. When I first saw these I fell in love. My boys were so excited to get the blue iridescent! They are timeless because they work for my one yr old and I can see them lasting many, many years as they don’t look like they are meant for any specific age. Other stainless steel kids’ dinnerware doesn’t touch these. Love that they are dishwasher safe. The customer service is wonderful too for this company too! A great investment for our children! 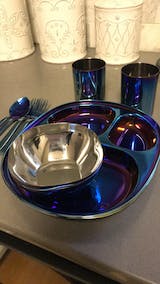 I gifted this to a friend for her baby shower , and she absolutely loves it! I Love that the products are safe for our children and also the environment. Not to mention, so pretty! My new go-to gift!

My kids have outgrown their partitioned plates, I wish these were around 5 years ago! I want to order some sets anyway just for snacks! 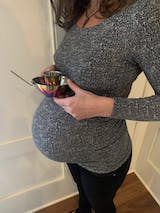 Thank you for the kind review, Kristin! We are so thrilled you've chosen Ahimsa for your gifts!!! Although the USDA recommends a healthy variety of foods at any age (which our modular system promotes) we are hearing some requests for non-compartment plates. We are listening and have something up our sleeves for those who prefer non compartments! Please keep your feedback coming - we love hearing what customers want whether its new products or colors! Happy, healthy eating! Manasa
S
Bowls - Set of 4, Iridescent Blue - NEW! S.W.
So fun!

Love these bowls! Great quality and they are the first bowls I reach for when making a snack for my son. And even myself! Highly recommend!

Our kiddos were so excited about their Valentine's day gifts❤ not only are they easy to clean, functional, and better for all, but my daughter says "they are so pretty"!!! We have always been super strict about what our kiddos eat, but not so much with what they are eating the healthy food on. We are thrilled with our purchase and can not wait to use the nesting spoon with our youngest. We will be purchasing many more in the future. 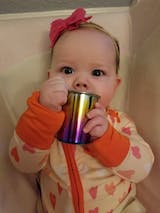 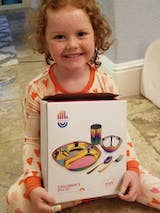 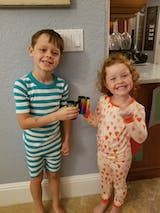